Back to Top
Amphibians

Many herpetologists claim they can easily tell the species apart, and field guides make it seem simple. For decades, I’ve sorted and resorted tons of them and I’m not confident that I can tell one from the other, so I’ll just call them generically cricket frogs in this note.

Cricket frogs may be first in numbers, but they are our smallest in body size. Adults are 1.5 inches (35 mm) in body length. Their bodies have moderate proportions, and their legs are rather long. When frightened, they can leap many times their length and make capture by a naturalist very difficult.

They breed (or at least chorus) from early spring through fall, the females laying up to 400 eggs over that period.

The “click-click-click-click” of their calls is a common night (and sometimes day) sound. Chorusing typically occurs while the frogs sit on floating vegetation. Since they are so small, this includes submerged plants at the surface, duck weed, and salvinia. The species name “crepitans” is a derivative of two Latin words that together mean “hand rattle,” an allusion to their call. “Gryllus” is the generic name of the field cricket.

Cricket frogs eat just about anything living that they can get into their mouths, and they are eaten by just about any predator that can catch them.

Two of the notable things about these species are their abundance (little frogs seemingly hopping everywhere) and their pattern variability (polymorphism). Both of these characteristics raise questions for a naturalist. An explanation of the latter helps us understand the former.

Cricket frogs are found with three basic patterns: all gray, red to yellow striped (sometimes a blend), and green striped. There are variations beyond these basic patterns, such as random green spots. The genetic cause of this pattern polymorphism is that there are multiple alleles for a single gene locus, much like the genetic system that causes human iris color to range from green to hazel to brown (blue eyes are a different issue, as they are caused by pure recessive genes). It has long been known that seasonal variation exists for the census of a certain type of pattern. If camouflage (crypsis) is the main driver, then you should expect the following to be operable:

In other words, predators may not see a gray cricket frog sitting on mud, but a green stripe will stand out like a sore thumb. Certainly this may be true, but that is not always what scientists find in nature. They may find no green striped cricket frogs at the grassy edge of a pond, or no tan/red striped frogs in the same place in the fall when the grass is standing dead and tan.

These pattern types and their variation may be maintained not by crypsis but by a mechanism called apostatic selection: a situation where a certain morph (pattern) may be protected against predation because predators develop a "search image" for one or more of the other morphs, thus simply overlooking the aforementioned or a less common (or rare) morph.

Whether we know the term search image or not, we’ve all experienced it. It is akin to learning a new useful word that you’ve never seen before, and now seeing it everywhere.

In the case of cricket frogs, a bird feeding along the shore may find a green striped frog in thick green vegetation, then immediately focus its visual searching on that image, moving right past a less cryptically colored cricket frog. Over time, the green ones are gone, and the others are still present.

In order for apostatic selection to exist, a prey species and its predators must satisfy the following conditions:

The late Dr. William Milstead proposed that apostatic selection is at work in cricket frogs. Additionally, it is interesting to note that species elsewhere have adopted this technique via parallel evolution, all being ecological equivalents (sharing a number of characteristics, behaviors and lifestyles) of cricket frogs, but none being closely related:

I’ve encountered a couple of these frog groups on their home turf, and they are uncannily similar in looks and actions to cricket frogs. 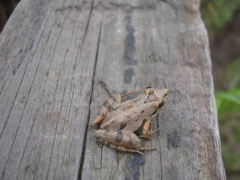 Northern cricket frog at the edge of the water.
Photo by James Beck.