Back to Top
Amphibians

After a summer’s afternoon warm rain, we often hear a characteristic nasal “neeeeeee”. Most observers never inquire as to the source and most of those who do find nothing. The source of the bleating sound is the eastern narrowmouth toad (Gastrophryne carolinensis), an inch-long pointy-nosed amphibian that is common throughout Louisiana. When crouched, its body forms a triangle, which is broad at the rear and pointed at the head. Depending on its environment, it may be gray, brown, or reddish in coloration. Though they are very easy to identify in coastal Louisiana, they have two characteristics that are unique among local frogs: 1) they have no round tympanic membrane behind the eye and 2) they typically have a fold of skin across the head just behind the eyes. [N.B., frogs and toads are common names. Frog usually refers to a smooth, moist-skinned anuran (the technical name for this group of amphibians). Toad usually refers to a drier skinned, often warty anuran. In this case, narrowmouth toads have smooth, moist skin, but are called toads due to their fat bellies.]

Narrowmouth toads occupy diverse habitats, but are usually associated with damp forests, fields, and roadside ditches. It is not uncommon to find this species hidden under logs and debris near standing water. Unlike most amphibians, they are rather salt tolerant and may be found in the vicinity of salty environments. In coastal Cameron Parish, Louisiana, I found them congregating in large numbers within fifty yards of the Gulf of Mexico surf. This ability allows them to invade barrier island habitats along some coasts.

Local frog species typically mate by the male mounting the female’s back and holding on by placing his hands in her armpits. If she is not receptive, she usually hops around with him riding piggy (or froggy) back. This is not so with our strange little narrowmouth toads. The males have special glands on their chests that secrete a sticky substance that allows them to stick to the female’s back.

Breeding may occur from spring into early fall and usually takes place at night, but daytime breeding aggregations are common. Females may lay 1,000 or more eggs that hatch into little round-bodied tadpoles. These critters seem to prefer temporary pools, but they may be found breeding under a variety of aquatic conditions. Their breeding sites of choice are always well vegetated. The males call (croak) with only the tips of their snouts exposed above water. They hold onto vegetation and are almost impossible to find, as they quickly swim to the depths when approached, hiding among leaves and rotting vegetation on the bottom.

Narrowmouth toad adults will eat most invertebrates that they can fit into their mouths, but their favorites seem to be ants and termites. They have been observed sitting at the entrance to an ant mound and eating ants as they come and go.

If you ever find a narrowmouth toad and pick it up, be careful not to touch your eyes or mouth before you wash your hands. It has skin secretions that can cause a burning or tingling sensation. Possibly for this reason, they are one of the few local species for which we have no recipe! 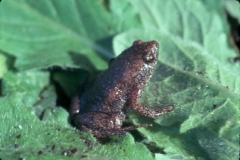 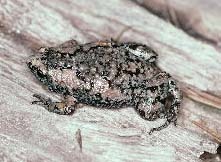