Each February, I take a field trip to the woods near Norco, Louisiana, that are on high ground in a cypress-tupelo swamp. The site has been producing oil for years. In spite of this, it is rich in all forms of local wildlife, especially a nice variety of reptiles and amphibians.

Over the years, I’ve used this trip to introduce herpetology students to herping (collecting reptiles and amphibians). The reason I choose this place at this time of year is that venomous cottonmouths (Agkistrodon piscivorus) are common, yet sluggish, since they are cold-blooded (poikilothermic) and are just coming to the surface after spending the cold winter underground, often in crawfish burrows. Their torpid condition renders them less dangerous to novice herpers.

Our local reptiles and amphibians do not “hibernate,” they brumate. Animals that hibernate slow their metabolic activity to the point where they are in a very deep state of torpor. Our brumating herps (reptiles and amphibians) slow their metabolic activity in response to low temperatures, but they are still active, just slower. As an example, if you found a hibernating animal and placed it on a table in your kitchen, it may take hours to see the first sign of life. A brumating animal, however, would immediately start moving and within minutes be moderately active. Even the classic “hibernating” animal, the bear, brumates. They have their young while in this condition and adequately care for them.

When visiting our collecting site, we simply walk the roads and turn logs, timbers, and discarded debris looking for concealed critters. If the weather is relatively warm, animals that have spent the winter well underground in cracks, crevices and burrows will come up under logs and other structures lying on the surface. They absorb a bit of heat that passes through the structure, yet are protected from surface predators while in their vulnerable indolent disposition.

Typically we find many anoles (Anolis carolinensis) under logs and often under bark on dead trees. They are green when active during the warmer months, but dark brown when brumating or inactive in hiding places. They also change colors by expansion and contraction of melanophores.

But the main targets for herpers are the snakes. It is so cool to turn a huge timber and find neatly coiled snakes tucked away in little depressions in the soil or crevices in the timber. We commonly find eastern ribbonsnakes (Thamnophis proximus) and broad-banded water snakes (Nerodia fasciata), but occasionally we are treated to a beautiful red and black juvenile mud snake (Farancia abacura). What a treat that is.

Of course, there is la cible spéciale, the cottonmouth. Although they are sluggish, we often get the flash of the pale mouth lining (hence the name), often with a slight elevation of the fangs, that reminds us to be careful where we put our hands. These animals are cryptic, relying heavily on their camouflaged dorsal pattern. Over the years, I’ve grabbed something under a log only to realize that there was a nearby coiled venomous snake. Interestingly, these animals instinctively know they are well concealed and they tend not to strike until actually touched. Whew! I’ve been close, but, knock on wood, have not been tagged yet.

There was a day when, as a scientist, I collected every herp I found. With the continued demise of habitat and other pressures on populations, there has been a continual decline in the distribution of many animal species and numbers of individuals. On our field trips now, we find critters, photograph them, sit and enjoy watching them, then neatly replace the log (after moving the animals to the side so they don’t get crushed), and leave them in the wild.

This is a pleasurable way to spend a few hours on a sunny late winter day, welcoming my scaly and slimy little friends back to their active world. 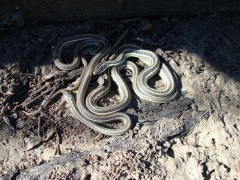