Four things, among many others, that I've harped on over the years are:
1.  Poisonous means toxic when consumed or absorbed.
2.  Venomous means toxic when injected via a sting or bite.
3.  It is rare that definitions can be given that are perfect and without exception.
4.  There are always exceptions to our understanding.

Regarding #3, we can discuss the meaning of poison, toxin, toxicants, venom, and related terms in precise detail. For the purpose of this Nature Note, we simply interpret poison and venom as something that causes harm.

The mantra is normally that snakes, scorpions, spiders, wasps, and the like are venomous organisms since they inject a toxic substance - i.e., venom.  They are not poisonous, since you can drink their venom without bad effects (unless you have rotten teeth or ulcers), or even eat their bodies (ick).

This simple discussion has worked for years, even though a couple of decades ago it was common for the two words to be used interchangeably.

So along comes a report of a snake that defies the easy definition.  The Japanese Grass Snake (locally called Yamakagashi), Rhabdophis tigrinus, of Japan, has long been known to exhibit venomous qualities when people sensitive to their saliva are bitten.  Not deadly, but venomous.

In 2007, Dr. Deborah Hutchinson, Old Dominion University, and other colleagues reported that the Japanese Grass Snake sequesters toxins from toads it eats in nuchal glands located on the top of the snake's neck.  These bufadienolide compounds (say that again, its fun) are poisonous to potential predators of the snake, and when accosted, the snake raises the nuchal glands just behind the head in a threatening posture.  Thus, they are poisonous, too.

We are used to dangerous critters in nature being nicely categorized as poisonous (toads, newts) or venomous (cottonmouths, rattlesnakes).  In support of #4 above, the Japanese Grass Snake is at once venomous and poisonous.

So much for another steadfast rule!  But, on the good side, this information makes for a great lecture in herpetology class. 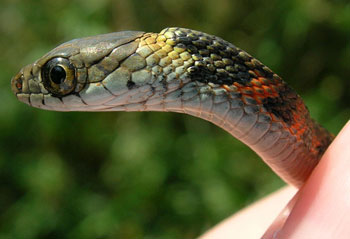 The Yamakagashi, Rhabdophis tigrinus, of Japan, has venomous saliva and poisonous compounds in it nuchal glands.  This snake feels a bit threatened - note that it has elevated its nuchal glands where it sequesters toad poisons as a defensive mechanism.
Photo by Deborah Hutchinson.