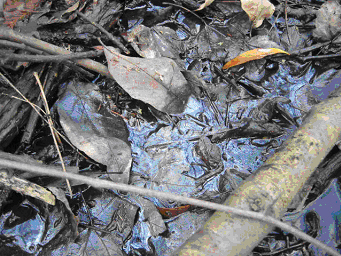 Ever find an attractive sheen of rainbow colors on the surface of the water? Such sheens are not uncommon in coastal Louisiana, but they may derive from very different sources.

Petroleum may, of course, be the source. There might have been a spill or a leak, such as from a boat engine, a parked truck, or an unthinking person who pitches an "empty" oil container into or near the water. Another common source is creosoted wood.

One may even find a naturally occurring seep where oil reaches the surface.

A common naturally occurring oily sheen originates from the seed cones of cypress trees. The cones usually fall into the water below the cypress, and an obvious rainbow sheen forms on the surface around the seed pod.

In puddles of woodlands or around the edges of stagnant or very slowly moving water, it is common to find sheens covering the water in and about leaves and other vegetation. It is tempting to wonder what form of pollution resulted in the sheens, but the answer is microscopic - and natural.

Tiny iron-loving bacteria of many types may be involved. A common tale is that some species of bacteria that live in areas with no oxygen (anaerobic conditions) get their energy by converting Ferric Iron (Fe III) to Ferrous Iron (Fe II) (chemists call this process reduction). As the Ferrous Iron moves through the ground water, it encounters water with oxygen, chemically fuses with the oxygen (chemists call this oxidation), then precipitates (separates from the water) and floats on the surface as a colorful sheen.

There are species of bacteria that may help accelerate the oxidation process, and the most common is Theobacillis ferroxidans.

At times, a significant area of the water’s surface may be covered and the sheen is as reflective as a mirror, having little rainbow-effect.

There are reports that fungi may produce a sheen on the surface of water, presumably from their spores being concentrated on the surface.

So, how can you tell an oil slick (from petroleum or cypress cones) from the ferric iron sheen on the water's surface? Just stir it around a bit. Oil spreads out thinly and re-coalesces, while the inorganic ferric sheens break up, fail to reunite, and often have jagged edges.