It is tempting to remove from your surroundings what you consider the noxious elements of nature. People clear poison ivy from their property to avoid exposure. The remove wasps and honey bee swarms because they fear getting stung and squirrels just because they can be aggravating.

The first couple of timber (canebrake) rattlers we found at the Louisiana Nature Center in eastern New Orleans, hefty fellas at 5 feet in length, were relocated. The Nature Center was an 84-acre woodland in the middle of suburbia crawling with families and kids, so we decided huge rattlers posed a threat. Admittedly, it bothered me to move them from their natural habitat, but it was the safe decision when operating a somewhat compact public area.

What should be done in wild, more isolated parks? Lots of people automatically kill or otherwise remove flora and fauna they don’t like or fear. How many spiders have been unnecessarily squashed?

This is especially true of venomous snakes. It is understandable that everyone fears an envenomation, but interfering with the balance of nature in a natural environment can have unintended consequences. A good naturalist learns how to make such considerations.

A discussion on the LABird listserv in 2011 focused on the presence of a frequently encountered cottonmouth at the Baton Rouge Audubon Society’s popular Peveto Woods Sanctuary in Cameron Parish, La. A range of comments, emotions, and suggestions were shared.

Miriam Davey, noted nature center naturalist, wilderness interpreter, and radio show host, opposed, in her words, “the removal, dispatch, or relocation of a native predator from a designated nature sanctuary.” Her points (slightly amended) listed below are well taken.

“First, cottonmouths are part of the native ecosystem and, as a member of that system, function as an integral component. They have a right to be there, just as much as folks like us.

“Second, it's entirely possible that removal of such predators, especially if it gets to be a pattern, will cause an unnatural increase in certain prey species, some of which might have a detrimental effect on creatures more popular with folks like us.

“Third, removal of native fauna denigrates an authentic wilderness experience sought by many folks like us. At some point, too much control of the landscape gives a place a feel of Disney World which I personally find repulsive. I wear high boots when I go where venomous snakes might be, watch where I sit and put my hands, and suggest others do the same.

“Fourth, if we start removing native critters we deem dangerous or we just don't like for one reason or another, where will we draw the line? What about American Alligators? Wasps? We've already made war on Poison Ivy.

“As a solution, why not put up a sign saying, ‘Wilderness Area, Visit At Your Own Risk,’ or, ‘Watch Out For Venomous Snakes, Spiders, Wasps, Nesting Alligators, Mud Holes, Nutria Itch, Mosquitoes, and OBTW Please Don't Eat The Mamou Seeds’ if you must, but please don't start cleaning the place up for people like me. I may not visit often these days, but I do like to think the place I recall so fondly hasn't become some birder’s version of a Disney exhibit.

“Oh, and lawyers have often told me when similar matters have come up, that designated and properly posted wilderness areas are usually fine in court unless they've done a lot of upgrading and control of the landscape. In other words, if it's obviously a minimally maintained wild area, people tend to know to watch out for wild critters. If it looks like somebody's back yard or a museum, with structures and interpretive signage and benches and such, they think they are safe from any harm and don't keep up their guard. And courts tend to rule accordingly.” 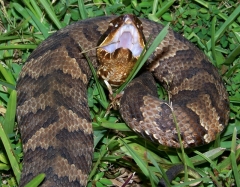 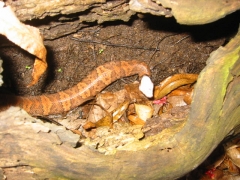 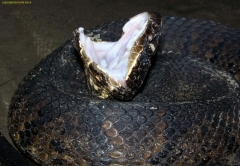 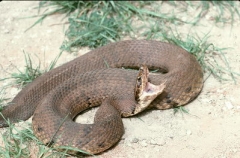 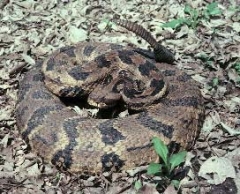 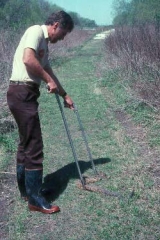