Back to Top
Insects

Summertime in the humid subtropics of south Louisiana marks the arrival of the Devil’s Horses, those large, black “crickets” with yellow or red stripes and normally concealed, but bright red or hot pink wings. The critters are actually southeastern lubber grasshoppers, Romalea microptera, members of the short-horned grasshopper family Acrididae. A popular Louisiana childhood past time before computer games was to harness lubbers to a matchbox and pretend they were horses pulling wagons.

You may remember having to dissect a cricket in biology lab. You guessed it! It was not a cricket at all, but a lubber grasshopper that may have been collected in coastal Louisiana, sold to a biological supply house, and then sold to the teacher.

Lubber grasshoppers lay their eggs in the late summer or early fall, and the eggs immediately enter diapause, or delayed development, in response to fall/winter conditions. Thus, the eggs are normally laid during winter with hatching occurring in spring. Soon thereafter, half-inch long juvenile lubbers are everywhere, often extremely abundant locally, slowly walking about on vegetation, munching the day away.

The nymphs stay in congregations with their nest siblings during their early weeks. They sleep in these groups clustered on the tops of low-growing vegetation.

Lubbers are paurometabolous (a great cocktail party word) insects, meaning that their immature nymph stages each resembles the adult form. There are five nymphal stages, each called an instar, and each lasts about 15 days before it molts its external skeleton, thus moving to the next instar. They grow to full three-inch long imago (adult) size by midsummer, breed during the next few months, lay one to three clutches of about 50 eggs in two-inch deep holes in the soil, and die before winter.

Mating behavior is ritualized. The male mounts the female, similar to most grasshoppers. Once aboard, the pair rock back and forth, while the male flips his wing covers, each time briefly exposing the red hind wings and producing a clicking sound.

One might expect that lubbers’ abundance makes them an important food source for many species of animals. Some are undoubtedly eaten by predators. But lubbers’ preferred food, members of the lily family Liliaceae (such as our swamp lily, Crinum americanum, and spider lily, Hymenocallis caroliana) and the Smilacaceae (the cat claws of the genus Smilax), contains allelochemicals that make lubbers distasteful to many other animals. The plants’ purpose for producing allelochemicals is to ward off herbivorous insects. Obviously, this plant defensive mechanism does not work on lubbers.

After a spirited discussion on the LABird listserv, the only report of predation on lubbers known to this experienced group of naturalists is loggerhead shrikes. In peninsula Florida, they are known to impale lubbers (Romalea guttata, a synonym of R. microptera) for a couple of days, then after the toxins have broken down a bit they consume the head and abdomen, rejecting the thorax that contain poison glands. Jay Huner was told this story by a birding tour guide, and Jim Ingold found it by searching lubbers in the Birds of North America accounts.

It is often reported, however, that opossums that eat lubbers vomit profusely afterward.

Like other grasshoppers, when threatened they spit a droplet of brown fluid that we call tobacco. Tobacco spit is not really tobacco at all. It is a brown liquid that resembles tobacco juice, and is composed of partially digested food mixed with slightly toxic chemicals produced by glands in the crop area of the digestive tract. The purpose of the tobacco is to prevent predation, and it is effective against birds, spiders, and small mammals. In humans, it stains skin and cloths, but causes no damage topically.

Lubber grasshoppers are not capable of flight. They have two pairs of wings covered by rather short, black wing covers. The anterior wings are yellowish with black dots, and the rear wings, as mentioned above, are red or hot pink and function during communication with other lubbers or to potential predators.

They do not hop long distances like some grasshoppers. They simply amble along feeding and breeding. It is not uncommon to see thousands of lubbers moving across highways where they are slaughtered by traffic. Due to their large size, dark bodies, and slow gait, interstate highway commuters have even mistaken them for tarantulas.

Their preferred habitat is grass that is at least somewhat moist. Although lubbers can be found throughout the state, they are abundant around Lake Pontchartrain, especially in the vicinity of Norco, LaPlace and Manchac, and they are common at the Barataria Unit of Jean Lafitte National Park.

Their value in the ecosystem aside, they have proven to be wonderful kid critters. They are sluggish and do not bite, their size and color cannot help but attract attention, and they are easy to keep in a jar. If you have budding naturalists in your family, take them out to see Devil’s Horses. My grandsons, Chaney and Grayson, had a wonderful day recently watching lubbers by the hundreds and hundreds. What an opportunity to help young minds grasp a higher understanding and appreciation of nature!

If you have never experienced the explosion of lubber grasshopper populations, go into the field and observe. It is a real natural treat. 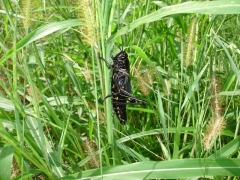 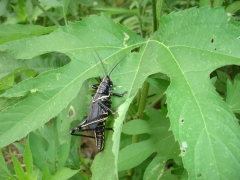 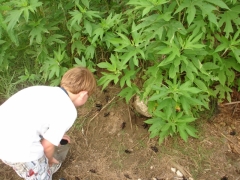