Alligator sightings are not uncommon in coastal Louisiana. The easiest way to see one or many is to visit Jean Lafitte National Historic Park’s Barataria Unit or Bayou Sauvage National Wildlife Refuge. During the warm months, alligators are abundant along their waterways. That said, alligators may be seen virtually anywhere there is water, including canals inside the levees.

Where do they go during our winter cold months? The average person probably thinks they “hibernate.” The actually brummate. That is, they react to a cold environment by slowing their metabolic activity, but certainly not to the deep torpor of true hibernation.

Alligators are reptiles and are not warm-blooded. They have the ability to live in water as cool as 40ºF, although weaker animals may die at that temperature.

They may, however, be very active in 40ºF weather by using behavioral adjustments. I was visiting the Tulane University Museum of Natural History at the Tulane Hebert Center one winter. It was a cold, sunny day. There were no leaves on the trees, and very little green on vegetation on the ground. I was wearing a stocking hat and a warm coat. As I was leaving, I saw a pond and wanted a photograph. As I walked down the hill to the pond’s edge, I stepped past a small ledge. I heard a loud hiss at ankle level and instinctively sprang forward. When I looked back, I found that the sound came from a very active alligator sitting at the entrance to a burrow. The opening was facing the sun. Although air temperature was rather low, the alligator was situated in a microclimate that was much warmer and it was very active and alert. My sudden appearance startled it and the gator was defending its territory. Wow! I did not expect that encounter on a mid-winter day.

What is the norm for our alligators during winter? Do they remain active, or do they consistently brummate all winter, becoming active during milder temperatures?

To cut to the chase, they brummate. The alligator at the Hebert Center became active because the sunlight shining on the water at the entrance to its burrow daily warmed its environs. At night, the water cooled and the gator became torpid.

Do they all use burrows? No, but many do. Some of the burrows are in banks and the alligator’s lair is above the water table so it rests in a musty little room. Others may be below water, but alligators that use these have to surface for air. These alligator holes, as they are called, are most often used during drought periods. If they dry, the alligator moves to another body of water.

Typically, alligators hide by simply submerging and lying on the bottom. Under normal active conditions, they can hold their breath for up to one hour. When resting in the water, they may either float on the surface or be supported by vegetation, or they may lie on the bottom, slowly rising to the surface when they need to breathe. 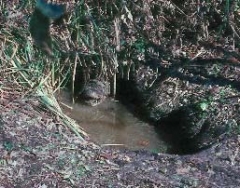 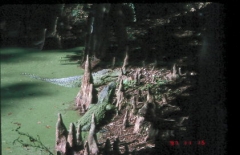