How Do We Place Value on Wetlands?

HOW DO WE PLACE A VALUE ON LOUISIANA PRODUCTS?

First, the low hanging fruit:  what are the big, obvious values in Louisiana?

Indeed, how does one place a value on a geographic area that, in and of itself, defines a way of life, a culture, and land of prosperity that is so important to a nation?  No time to Lose.  Facing the Future of Louisiana and the Crisis of Coastal Land Loss (Coalition to Restore Coastal Louisiana, 1999; find at http://www.crcl.org  [8/27/02]) discusses the economic issues that should be considered.  Among those are real estate values, insurance, banking and investments, infrastructure (roads, levees, other government property), entire industries and their support systems (Morgan City shipyards, Harvey Canal and oil and gas support, etc.), fisheries, and much, much more.

A number of studies have discussed a variety of ways that values can be assessed for wetlands.  The following are excellent examples of these discussions:  Gosselink et al. (1974), Shabman and Batie (1977), Mumphrey et al. (1978), Wentz (1981), Anderson and Rockel (1991; this paper also analyzes other studies), and Constanza et al. (1997).  For additional information, visit http://www.lacoast.gov/wetlands/functions.htm (8/27/02). 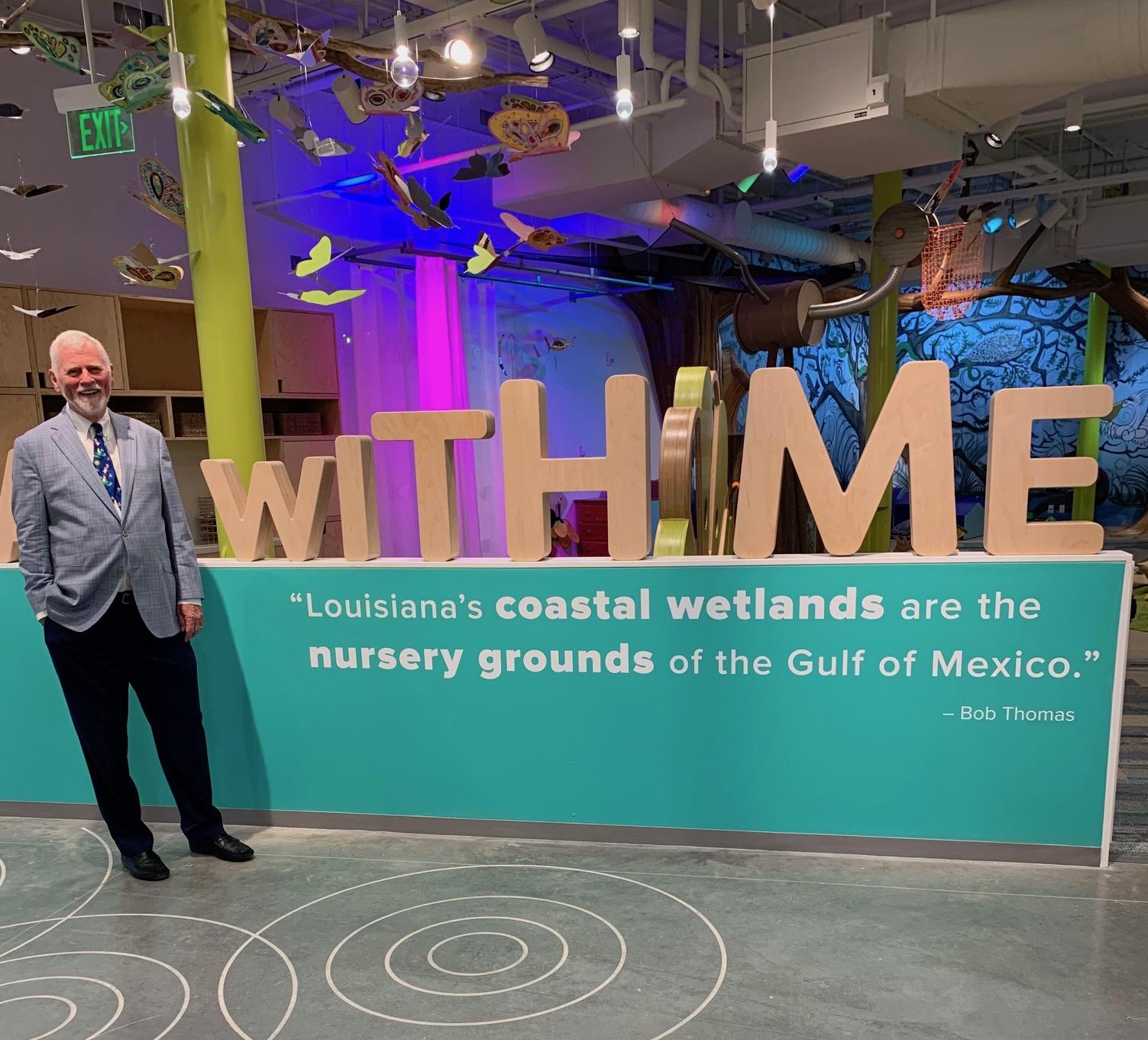 Research in a Georgia tidal marsh showed that 45% of its net primary productivity was lost to an adjacent bay by tidal action.

Another study of a 62 ac marsh showed that 100 lbs and 310 lbs of organic matter were flushed at neap and spring tides, respectively.  Don't forget, tidal flushing is good for getting organic material into the sea to supply the food chain, but it robs it from the marshes.

Still another study indicated well over half the organic matter in a Gulf Coast estuary originated in adjacent tidal marshes.

Since it has been shown that estuaries get most of their nutrients from marshes and it has been estimated that 66% of the Atlantic and Gulf of Mexico fisheries are estuary dependent, then it is inferred that the tidal marshes are of great value to commercial fisheries.  [Do not forget that this flushing of organic matter from more inland marshes is detrimental to the marsh itself.]

If we are to ever save the wetlands, we must find a way to give them an accepted value.  Let's investigate a few ways of calculating this value.  The following examples calculate a monetary yield on a per annum basis.  Though it is easy to say that the money that arises from the sale of crabs is the value of the wetlands, this is not really true.  The true value of the wetlands is its capacity to produce crabs.  This is similar to saying that the only value of my savings account is its annual yield.  Of course, this is not true.  The true value of my savings account is the amount of money that resides there.  The only way that I can affect that value is to insure that it is housed in an account that gives the maximum percentage yield.

So, how do I find out what the true value of the "blue crab yielding wetlands" really is?  Economists suggest that you use the same procedure that you would use to calculate how much money is in a savings account if you only know the interest paid.  That is to say, one needs to view the blue crab yield as the "interest" being paid by the true value of the marsh as it exists.  As an example of interest earned on savings, let's say that last year my savings account yielded $100.  It was maintained in an account that gives a 6% interest rate.  In order to calculate the amount of money in the account, I use the income capitalization formula:

So, I have a savings account that gives me $100 per year.  Its value is not $100, it is really $1,666.66.  Using the blue crab analogy, the value of the marsh is not what it yields; instead, it is the quality of the marsh that can give the yield we receive.

Let's look at a few real examples from the coastal wetlands, calculate their yields based on data available to the scientists at the time of their analyses, and then apply the income capitalization formula to find the real value.

Example 1.  Fishery production based on harvest of naturally produced organisms.  In 1965, Georgia fish and shellfish fisheries had a dockside value of $3.7 million.  When processing was finished, it added another $5.2 million, so the total value was $8.9 million.  Georgia has 393,000 ac of marsh, so, based solely on fish and shellfish productivity, $8.9 million/393,000 ac = $23/ac.

On the basis of this study, the annual yield is

THIS VALUE ASSUMES THAT ALL VALUE IS FROM THE MARSH AND NOTHING IS FROM CAPITAL, LABOR, AND MANAGEMENT.  ALSO, NO ONE REALLY KNOWS HOW MUCH OF THE FISHERY WOULD COLLAPSE IF THE MARSHES DIED.

Using the income capitalization formula, we get:

Example 2.  Mariculture based on utilization of natural primary production.

One way to value wetlands is to calculate the potential for development.  Development is not only the cursed draining and filling!  It can also involve aquaculture (freshwater farming) or mariculture (sea water farming).

Let's use the oyster industry as an example since its mariculture would require the least amount of marsh alteration.  The following figures are based on a study done in South Carolina in 1968.  The first column represents figures based on normal harvest from natural settings.  The second column (intensive mariculture) is based on using a heated hatchery and larval feeding.  The third column (intensive raft culture) is based on the Japanese-type culture method where a portion of the water surface is covered with rafts and water flows over and through them.

Example 3.  Waste treatment work.  We must not ignore life support work that natural areas carry on without development.  The free-work-of-nature must be evaluated before any kind of development is considered.

Studies of five mid-Atlantic estuaries showed that they received an average of 19.4 lb of BOD/ac/day of primary treated organic matter (BOD = biological oxygen demand, since they consume oxygen as they decompose).  At that time (1971), secondary treatment cost 4 4/lb, so the estuaries were saving the citizens $283/ac/yr.

This study found that these marshes were overloaded with BOD and were being rapidly depleted of oxygen.  It was calculated that the marshes could receive 3.5 lb/ac/day and have oxygen reduced by only 1 ppm.  Their values would still be $2,555 (with the formula, $42,583).

Other functions of the marshes from which we derive value include (from Anderson and Rockel, 1991):

4.  Sediment replenishment - sediment is deposited when flood waters are slowed.

8.  Recreation (described and quantified above)

11. Historic and archaeological use

12. Educational and research use

13. Water quality improvement (as in waste treatment above)

There have been several attempts to quantify most of the above categories.  Here are a few values given them (from Anderson and Rockel, 1991, Table 12, p. 45).

Thus far we have taken individual components and assessed a value on each.  This is difficult since some work against others (e.g., sports vs intensive mariculture).

There are many attempts being made to quantify wetland values using an ecosystem approach (i.e., attempting to use all the productivity and values of the entire ecosystem).

One such method (Gosselink, Odum, and Pope, 1974) is the GNP/NEC approach which uses the Gross National Product (GNP) (=the total productivity of the U.S. for one year in dollars) and the National Energy Consumption (NEC) (=the total consumption of energy of the U.S. for one year expressed in kilocalories, or kcal; a kilocalorie is the quantity of heat needed to raise the temperature of one kilogram of water by one Celsius degree).

Based on published studies, we know that tidal marshes produce about 22,000 lb of dry matter/ac/yr.  We also know that a pound of this matter yields 1,850 kcal of energy.

TO GET THE DOLLAR ESTIMATE:

As pointed out by Anderson and Rockel (1991: 37), the kcal generated by the wetlands has no relation to economic value.

Another approach is that of Costanza et al. (1997).  They used Energy Analysis, which is a technique that calculates the cost of producing the values that are offered by wetlands.  According to the late Dr. Shea Penland (pers. comm.), this technique:

2. Converts this energy estimate to a fossil fuel equivalent (since that is what we understand best).

3.  Converts the fossil fuel equivalent into dollars by using a ratio of economic value to energy use (such as GNP to total energy use by the overall economy).

They calculated an annual recurring value of $5983/acre for wetlands on a global basis.  Understanding that today=s dollar won=t be of the same value (buying power) in the future, economists apply something called a “discount rate.”  Though there is much argument about how to establish a discount rate when discussing Mother Nature=s commodities, Costanza et al. (1997) used 3% and 5% rates, which yielded wetland values of $119,860/acre/yr and $199,767/acre/yr, respectively.

HAS ANY VALUE BEEN OFFICIALLY ACCEPTED BY THE STATE OF LOUISIANA?

Of all the techniques that have been tried to place the true value on wetlands, this is the most equitable in the broadest sense.  The steps are simple, though probably impossible:

1.  Catalog all functions of the wetlands.

2.  Ascribe value to each function as the cost of the next best procedure to accomplish the same task.

3.  The answer is the value of the wetlands in terms of "replacement value."

In other words, the real value is what it would take to replace it if it's gone!

SOCIETY AND THE VALUES OF WETLANDS

The real problem is that the most important values of wetlands (erosion control, flood control, nursery grounds for fisheries, water supply and treatment) accrue to society, not to the landowners.  As long as coastal wetlands are in private ownership, decisions regarding their fate will be made on the basis of what is best for the owner, not society.  Landowners tend to undervalue wetlands except for the direct benefits they might derive, such as trapping, hunting, and fishing leases; camp rentals; minerals exploration and removal; aquaculture; etc.

In a perfect world, all wetlands, especially coastal wetlands, might be publicly owned.  However, we do not live in a perfect world, so we must work with the reality that the landowners pay the freight (such as taxes) and call the shots.  It is incumbent upon we the citizens to maintain contact with the owners.  Thank them for wise decisions, inform them of poor decisions, and urge them to maintain the overall quality of our valuable wetlands resources.