How was the Mississippi River Delta Formed?

FORMATION AND EVOLUTION OF THE DELTA

The coastline of the northern Gulf of Mexico has moved over geologic time.  The following map shows how it has changed over millions of years. 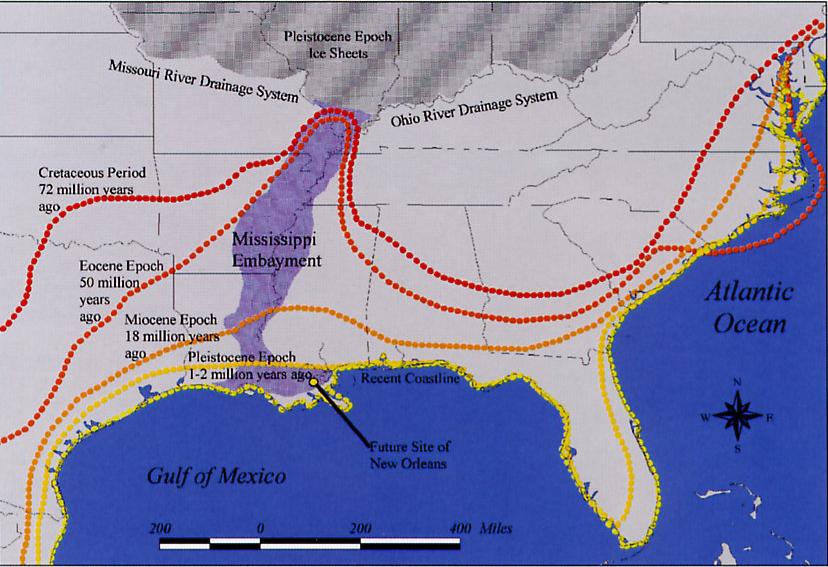 HOW THE MISSISSIPPI RIVER DELTA FORMED AND EVOLVED

The Bradyan (Peorian) interglacial period ended about 60,000 ybp (=years before present), and this marked the maximum extent of the Prairie Terrace (a broad deltaic plain characterized by highly oxidized silty to sandy clay soils; a relict of the prairie terrace extends from the present site of Slidell through Mandeville and Ponchatoula to Baton Rouge).  Since that time, it has been uplifted by as much as 40 feet north of the present northern shore of Lake Pontchartrain. 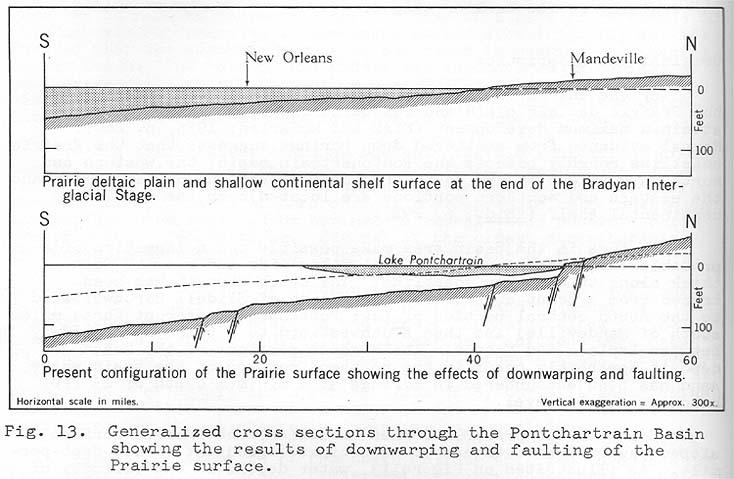 Between 30,000-6,000 ybp, sea level slowly began to rise (it was the end of the Wisconsin Glaciation, so the water ran back to the sea), thus ultimately forming the Pontchartrain Embayment when the downwarped portion of the Pontchartrain Basin was inundated.  Two beach trends formed in this area during this time period:  1) Milton's Island Beach Trend:  An old beach that extended from present day Slidell, through Lacombe, to just east of Ponchatoula.  A remnant is Milton's Island, a high pine covered ridge just south of Madisonville.  2) Pine Island Beach Trend:  This was much larger and extended from just southeast of Slidell into present day eastern New Orleans.  Little Pine Island, Little Oak Island, and Big Oak Island are but three of the best known remnants. 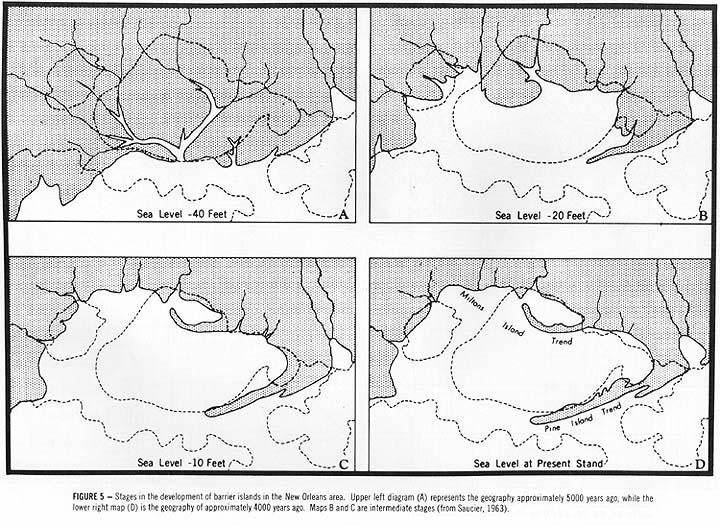 Sea level began to rise to present day levels at the beginning of the Holocene transgression about 18,000 ypb.  Geologists now believe that this period of time has been marked by periods of rapid sea level rise interspersed with four periods of standstill, i.e., relatively constant sea level.  These include the following (from Penland et al., 1996: 3; negative sea levels are referenced to present sea level):

During the periods of rapid sea level rise, the sea water rose at a sufficient rate to overwhelm the Mississippi River sedimentation processes that would normally occur, and cause the lower alluvial valley to transgress (erode back) and be submerged, with the accompanying loss of coastal wetlands.  During the periods of standstill, a shelf-phase delta (a delta formed at the edge of the then existing edge of the sea) would form.  The data presented in the table above show the name, time of development, and where the particular delta is located relative to today’s sea level.

We will now focus on the Modern standstill, or, what we usually call the Modern Delta.  Though the discussion above indicates that the Modern standstill has been with us for only 3000 years, the ensuing discussion will be based on research that discussed a 6000 year time-frame.  In order to bring the discussion into some conformance with current information, I have arbitrarily adjusted the time-frame numbers down from 6000 ybp to the currently accepted 3000 ybp.  In our discussion, the time frames are not as important as 1) the concept of what has happened and how and 2) the sequence in which it has occurred.  BE SURE YOU UNDERSTAND THIS DISCREPANCY.

About 3,000 ybp, conditions were ripe for the formation of what we now call the Mississippi River Delta (= the Modern Delta, or Modern standstill).  The river was a proper size, the flow rate was right, there was adequate sediment carried by the water, the Gulf coast was an appropriate depth and grade, and sea level was at a standstill.  Over time, sediments carried into the Gulf of Mexico by river water were laid down until they appeared above the water level, thus forming new land or were sufficiently shallow to support marsh vegetation.  As more land developed, the river chose new routes to the Gulf by cutting new channels where there was less resistance.  As these successive routes aged, the river sought new pathways.  In this stepbystep fashion, a large deltaic region developed.

The following graph by the late Dr. Len Bahr will give you context for what was happening in human history as our geologically young delta formed.  It is a remarkable presentation of the delta’s history. 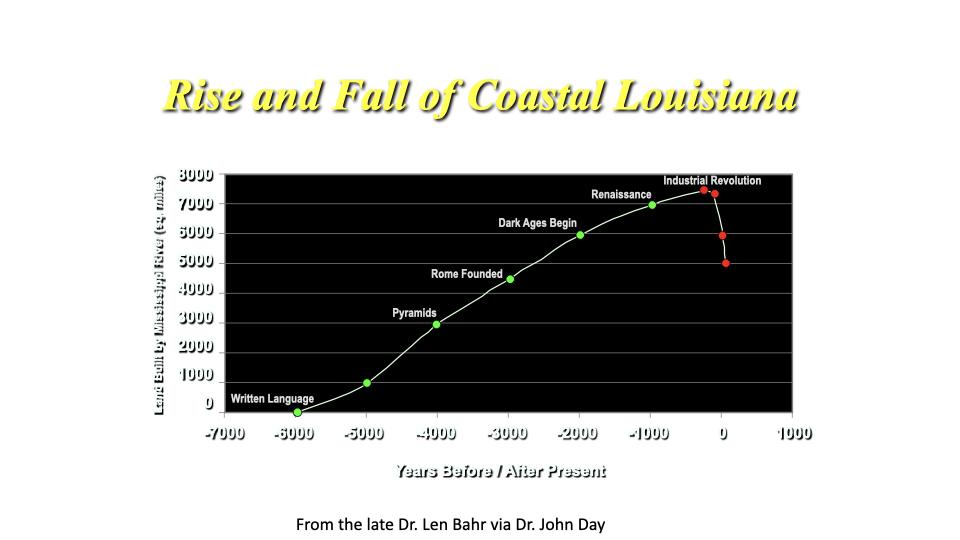 We mentioned earlier that rivers are lazy and follow the path of least resistance to the sea.  The history of our Mississippi River Delta, which most see as one delta, is characterized by change rather than consistency.  Here are the stages of development of our delta: 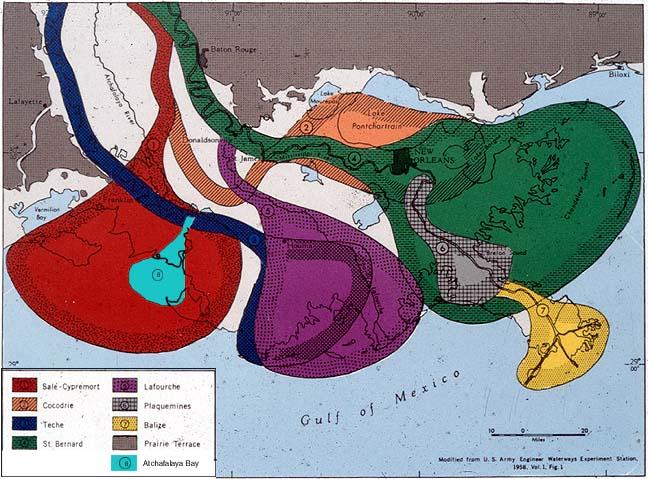 1.  Salé-Cypremort Delta - 3,000-2,250 ybp - The river used to run down this path.  Conditions were right about 3,000 ybp for a delta to form.  As the delta enlarged, the grade of the river leading to the Gulf became less.  Additionally, as the delta enlarged and more marshes developed, there was more friction as water had to move through the growing vegetation.  Due to this loss of gradient advantage and increased friction, the river found a weak point in the natural levee near present day Donaldsonville and it formed a crevasse (a hole in the natural levee; also called a jump) and began to flow east (about 2,250 ybp).

2.  Cocodrie Delta - 2,250-1,750 ybp - The river slowly abandoned the Salé-Cypremort Delta and flowed to the east where it began to build the Cocodrie Delta, essentially over the majority of the present Lake Pontchartrain bed and the area occupied by Greater New Orleans.  Gradually, the loss of grade and increase in friction once again caused the river to find a weak point well above Baton Rouge.  A crevasse occurred and the river again changed its course.

3.  Teche Delta - 1,750-1,250 ybp - The crevasse above Baton Rouge caused the river to flow as far west as Lafayette, through much of the present day Bayou Teche, eastward to a point bound on the north by present day Houma and on the south by the Gulf.  This Teche Delta was the active delta for 500 yr; the Salé-Cypremort and Cocodrie Deltas continued to decline since they were not receiving enough sediment to overcome normal subsidence and related deterioration.  Once the Teche Delta's gradient advantage was lost and the delta expanded, the river shifted to the east above Baton Rouge into its present day channel.  It began to form a delta of tremendous magnitude to the east.

4.  St. Bernard Delta - 1,300-750 ybp - The St. Bernard Delta became huge.  It covered half of the Cocodrie Delta and extended just beyond the present day site of the Chandelieur Islands.  This wonderful, large delta grew for some 550 yr before a crevasse occurred again near present day Donaldsonville.  Now the river flowed south to the Gulf via a channel that we now call Bayou Lafourche.

5.  Lafourche Delta - 750-350 ybp - The Lafourche Delta overlaid the Teche Delta, but was actually much larger.  It extended well beyond present day Grande Isle.  A large portion of the river moved east into much the same channel it used in the St. Bernard Delta, but it turned south just east of present day New Orleans and built a new delta.  This jump occurred just 150 yr after the Lafourche Delta began to build, so from 600-350 ybp, the Mississippi really had two major distributaries in the delta region.

7.  Balize Delta - 250 ybp to present - The Balize Delta contains the present mouth of the Mississippi River.  It extends to the edge of the continental shelf and has three openings directly into the Gulf:  Southwest Pass (where all current shipping occurs), South Pass (oil and gas transportation and big game fishing), and Pass a Loutre (some barge, but mostly crew boats and fishermen).

8.  Atchafalaya Delta - recent (subaerial since 1973) - In the earliest years of the 20th Century, Grand and Six Mile Lakes were totally open bodies of water and there was no deltaic land in Atchafalaya Bay.  By the late teens, the northern portion of Grand Lake began to fill.  Sediment continued to be deposited throughout the lakes until they were virtually settled in with a few channels by the late 1970s.  Once the lakes were filled, sediment flowed through to the coast and began to form deltas.  The first subaerial deltas appeared after the floods of 1973.  There are now many well developed deltaic islands formed (about 22,000 acres by 1975, with a projected 192,000 by 2020) and the Corps of Engineers is creating more via their dredging operations by directing where the dredge material is placed.  To the east, between Isles Dernier and the Timbaliers, the Corps constructed a rock ring that has been filled with dredge material.  This replaces Wine Island (and bears the same name) that was lost to erosion.

It is important to remember that once a given delta is abandoned by the river, the delta is affected by many forces (discussed later) that cause it to deteriorate to some extent.  This is why the old front of the St. Bernard Delta, the Chandelieur Islands, is now separated from the mainland by the expansive, shallow Breton Sound.  The marsh that used to be there has eroded due to naturally occurring processes that will be discussed later, and one big whopper of a mistake by the Corps of Engineers - the Mississippi River Gulf Outlet, or MRGO (or Mr. Go).