Back to Top
Crustaceans

There are many species of critters living along the beach front that are seldom seen, yet there is constant interesting evidence of their presence.

One such example is the beach ghost shrimp, Callichirus islagrande, a burrowing animal that seldom, if ever, exits its tunnels willingly. This species is endemic to the northern Gulf of Mexico and inhabits the high energy foreshore of barrier islands and similar stretches of quartzite sandy beaches.

The principal evidence of their presence are the inch-high turrets, with a three-quarter-inch opening to their system of tunnels into the substrate. Where one is found, others are always present existing as colonies for 100 meters or so parallel to the beach front, and extending out from the low tide mark for a few dozen meters.

They rarely leave their tunnels because they are immediately gobbled up by fish that cruise their habitat.

Beach ghost shrimp spend their time consuming phytoplankton and other organic matter that they filter from water moving into and out of their tunnels. Water moves as a result of the shrimp waving tiny paddles (called pleopods) located underneath their abdomen. The food particles are captured by appendages beneath their thorax (pereopods) and transferred to the mouth. Mating presumably occurs in the tunnels, followed by females brooding their eggs. Clutches are often fertilized by more than one male.

When populations peak, another bit of evidence of their presence is the arching swash lines of fecal pellets that are washed onto the shore by the millions. Their size and color are reminiscent of chocolate sprinkles used on donuts and cupcakes.

Don't bother trying to dig them up with your hands, because they will move deeper into their branched system of tunnels and chambers faster than you can dig. The only way to efficiently collect them is by using an Australian yabby pump, basically a suction tube made of PVC or stainless pipe. Place the tube over the burrow opening, lift the plunger, and you should have a beach ghost shrimp in the tube.

Next time you visit the beach, don't just search for bottlenose dolphins and sharks. Look beneath your feet for unexpected marvels. 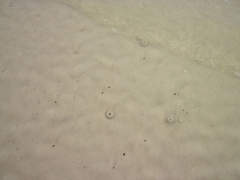 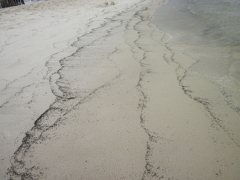 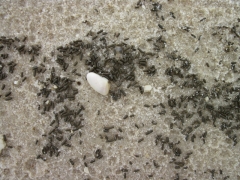