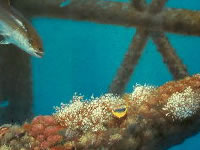 Of the more than 4,500 oil and gas-related structures in the Gulf of Mexico, 90% are within Louisiana waters.  The first offshore platform was constructed in 1947 in Ship Shoal, about 12 miles south of Terrebone Parish.  Since that time, these structures have been very important in two ways:  1) they have in recent years supplied our nation with 25% of its oil and gas requirements, and 2) they serve as hard structures in an otherwise soft bottom environment for reef species to grow (including barnacles, corals, and all sorts of other reef animals).  This species growth, in conjunction with the cover provided, makes the structures an ideal habitat for all sorts of commercial and sport fish, especially snapper, grouper, cobia, amberjack, and various mackerels.

The presence of these fish gives them economic importance, since sport fishing is big business in our state.  When large numbers of scuba divers who frequent the rigs and nearby commercial fisheries are included, the result is the creation and maintenance of many jobs and a large tax base.

Since the structures have such value to fisheries, the removal of the structures has caused concern.  Senator John Breaux sponsored the National Fishing Enhancement Act of 1984 to encourage coastal states to establish artificial reef programs.  This was followed by the Louisiana Fishing Enhancement Act of 1986 (LFEA), which set the standards for our state’s program.  The law established the Louisiana Artificial Reef Council to oversee the state’s artificial reef program and the Louisiana Artificial Reef Trust Fund (LARTF) to support it.  The Louisiana Department of Wildlife & Fisheries, in cooperation with the Louisiana Geological Survey and the Coastal Studies Institute of LSU’s Center for Energy and Environmental Research administers the program.

It has been the responsibility of oil and gas companies to remove structures within one year following the completion of production.  This was normally done by taking the structure to land and dismantling it - a very expensive endeavor.  LFEA gave companies a new option:  they could now scuttle the structures, thus saving large sums of money and retaining the surrounding resources.  Each company must pay LARTF an amount equal to one half its savings realized by scuttling the structure rather than dismantling it.

Of course, there are controls.  There are prohibited areas such as shipping lanes, known commercial fishing grounds, shallow waters, and the like.  Scuttled rigs are marked by buoys.  The decision of the fate of each structure is taken seriously, and not all structures will qualify for use in the artificial reef program.

The beauty of the program is that everyone wins:  we keep the fisheries resources, industry saves lots of money, and our program is funded without tapping the state’s general fund.