A FEW COMMENTS ON SALT DOMES (notes and figures from Martinez, 1991)

There is a belt extending from eastern Texas to western Alabama, and from the Gulf coast to about the latitude of Shreveport-Dallas, where a vast underground layer of salt was laid down millions of years ago, and subsequently covered by layer after layer of sediment.  This layer of salt, called the Mother Bed, formally referred to as the Louann salt, began forming during the Jurassic some 150 million ybp.   The Louann salt extends southward to a great wall of salt, the Sigsbee Escarpment, located 100 miles off the present shoreline.  The Louann salt bed is miles beneath the surface, and it is available to us through salt domes, extrusions of salt that extend to or near the surface. 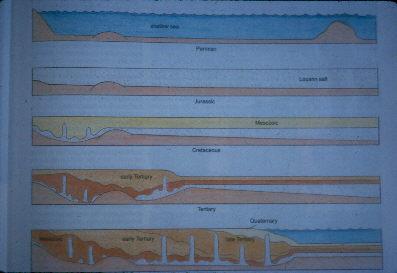 We normally see salt domes at the surface in one of two forms:

1.  An elevated area, called an island in south Louisiana, that may be a couple of miles in diameter (e.g., Weeks Island, Avery Island, Cote Blanche).  This occurs when the extruding salt pushes the surface upward.

2.  A subsided area.  This occurs when the ground water moving past the top of the dome dissolves it faster than the column is rising, thus causing the surface to subside.

The salt domes are actually the tops of fingers of salt extending toward the surface from the Louann salt.  These may extend miles above the Louann salt and may be a couple of miles wide.  They rise toward the surface because the salt is less dense than the overburden soils.  One theory suggests that the salt rises up the center of the salt column, travels laterally when it reaches the top, then moves down the sides and curls under itself, just like a mushroom cloud of an atomic bomb (termed toroidal flow).  As the column extrudes upward through the sediment (a process called diapirism), it bends the sediment layers above it into isoclinal folds: 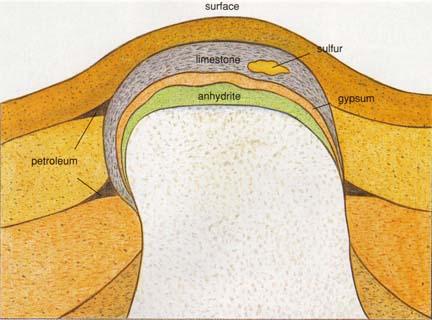 These isoclinal folds are economically important because they typically are sites where oil and sulfur deposits occur.  Salt diapirs are always surveyed closely by oil and sulfur companies.

These salt domes are also economically important to humans in that they are one of our chief sources of salt.  Salt is mined by two methods: 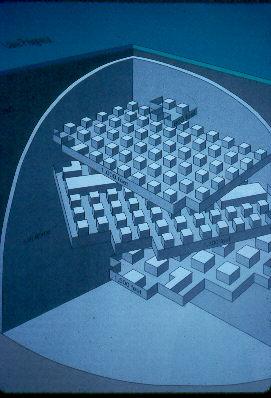 2.  It may be solution mined by running fresh water in, allowing salt to dissolve in the water (forming brine at over 200 ppt), removing the brine, and evaporating the water from the brine to leave salt (this method is used in Mexico).  This technique requires about seven barrels of water to dissolve one barrel of salt.

Salt dome caverns have also become important as inert storage places.  There are many caverns that are presently used to store natural gas and oil.  The U.S. Strategic Petroleum Reserve (a system for storing oil for use in a national emergency) has sites in south Louisiana and eastern Texas that can store up to 750 million barrels of oil (the SPR's typical cavern measures 2000 ft vertically and 175 ft horizontally and contains about 10,000,000 barrels of oil; the top of the salt dome is about 1,500 ft below the surface and there is usually about 300 ft of salt above the top of the cavern, thus making the cavern begin about 1,800 ft below the surface and ending at about 3,800 ft).  Other products stored include LPG (liquified petroleum gas) and compressed air used to turn turbines.  They have been (and are being) considered for nuclear and other chemically hazardous waste.

Salt domes have been salt sources for all sorts of animals over the years as well as Native Americans.