HOW SEDIMENT IS DEPOSITED FROM THE RIVER

There are three basic steps that cause the sediment load of a river to wind up settling out and providing a substrate for vegetation, either as marsh or as exposed land.

1.  Sedimentation:  As the flow rate of a river slows, it possesses less energy.  With decreased energy, it cannot carry as much sediment load, therefore sedimentation, or the dropping of sediment, occurs.

a.  The first particles to fall will be the largest - the sands.  This fact is the reason that natural levees are always composed of sands.  If you go to the river and fill a bottle, the sands will settle immediately.

b.  The second largest particles are silts and they characteristically fall farther away from the channel.  Most of the alluvial plain of a river is composed of silts.  If allowed to sit for a few hours, your bottle of river water will have a layer of soil appear on the bottom.  Other than any sand that may have settled out quickly, this layer is composed of silts.

c.  The third and smallest particles are the clays.  They have weak electrical negative charges on their surfaces.  Since they are so very light, plus when they approach one another they repel from having like surface charges, they virtually never settle out of suspension.  In your bottle of river water, the murkiness is caused by clay particles in suspension.  If you put it away in a closet for a year, it will still be murky.

2.  Being left on the surface when water sinks into the ground:  sediment particles are “strained” out by surface particles.

3.   Evaporation:  When a river swells, spills over its banks, and then recedes again, large pools of water are invariably trapped behind the levees.  Over time, the water soaks into the soil and the sun evaporates that which doesn't.  In this way, clays finally add to the soil of the alluvial plain.  If you evaporate the water from your bottle of river water by placing it in the sun or boiling it, you will find a thin layer of clays left behind.

4.  Flocculation:  As mentioned, individual clay particles remain in suspension in freshwater due to their small size and surface charge.  When they enter saltwater, however, their surface charge diminishes to no charge, then crystallization forces take over and the clay particles clump together (= they flocculate).  Once enough flocculate so that the particle size is large enough so that they can settle out, they fall to the bottom.  This is termed salting out.  For this reason, the prodelta (that place where the river flow first hits the sea) is virtually solid clay, though it may later be overlaid with other sediments as the delta progrades (such as in mudlumps).

You can cause the clay in your bottle of river water to flocculate by adding salt and stirring it about.

WHAT ARE THE SOURCES OF SEDIMENT FOR THE COAST?

3.  Sediment from spoil banks and the like being redistributed.

THINGS THAT AFFECT SEDIMENTATION AT THE MOUTH OF THE RIVER:

1.  Sea level:  A rise or lowering of sea level will greatly change the sedimentation characteristics at the mouth of rivers.

2.  Tides:  Since the tidal amplitude of the Louisiana coast is low (roughly a foot), this has little impact in our region for most of the year.  It has its strongest effect during the fall when river flows are at a minimum.

A.  As tides rise, the water leaving the mouth of the river is sloshed about and thoroughly mixed (depending on the depth of the receiving basin and the amount and speed of the river water).  This negates the effect of buoyancy, whereby less dense freshwater will plane out over the denser saltwater and carry sediments to more distant areas.

B.  If there is a large tidal amplitude and low outflow from the river, the tidal water may force its way upriver and result in a bidirectional movement of sediment.

C.  "B" above also results in a range of positions of the land-sea interface and of the zone of marine-riverine interaction.  This range is both vertical and horizontal.

3.  Wave effects:  Waves can sort and redistribute sediments that are already deposited.  Deltas tend to negate this effect since they constantly have new sediment being introduced.  Obviously, there is more impact during storms than otherwise.

4.  Coastal currents:  Currents can laterally distribute sediments.  Along our coast, the currents flow in a counterclockwise direction just off the continental shelf.  That sediment that does not settle over the edge of the shelf is swept toward the Chenier Plain and the Texas coast.

If these coastal currents are strong enough, they can actually sweep away all the sediment and prevent a delta from forming.  An example is the Guiana Current off the coast of South America.  It sweeps to the west over the northern coast of the continent and prevents the Amazon from building a massive delta into the Caribbean.

Sometimes the dynamics of a river change and there may be rapid localized loading of incompressible sands over less dense, and highly plastic, clays.  This causes the movement of the clays, just like pressing down on the surface of chocolate pudding.  You push on one end, and the other rises.  When the sand loads thickly over the clays, the clays move upward in zones where there is less sand cover.  If the localized loading is heavy enough, clay may actually extrude above the surface of the sand (much as one pops a zit - yuk!).  This clay extrusion is called a mudlump, some of which can be 200 m in height above their clay base.  A mudlump's growth rate depends directly on the speed of the sediment deposition.  They may grow several meters per year or not at all.  It is known that some have grown four feet in 24 hr! 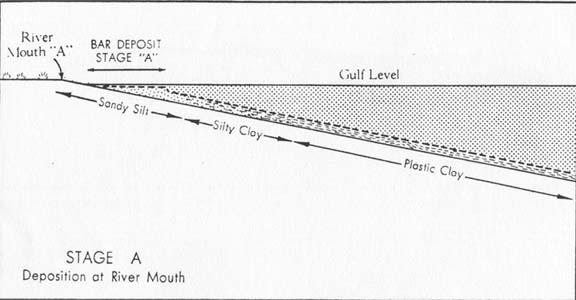 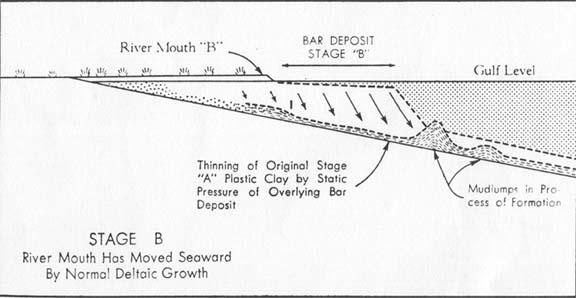 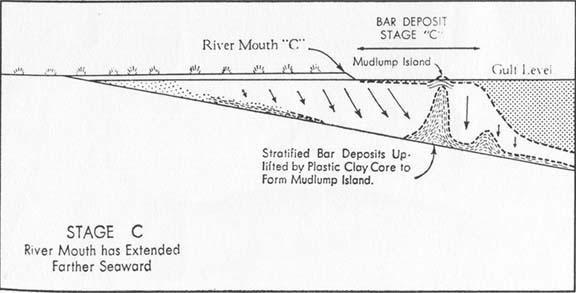 Since mudlumps are fields of sediment being pushed around, they can carry things with them.  Fossils are frequently found on their surface, and old sunken boats have been discovered on them.  Back in the 1950s, some U.S. Fish and Wildlife Service folks were studying birds in the Mississippi River Delta.  They constructed a cinderblock house and were dismayed as they watched it sink into the soft soil over a period of months.  They were even more astonished when they watched it reappear as a mudlump rose beneath it!

Mud volcanoes are places where marsh gases erupt through a mudlump.

Mudlumps are best seen outside of South Pass at the mouth of the Mississippi River.