Louisiana has 40% of the coastal wetlands of the continental United States.  This translates to about 7,000 square miles of some of the most diverse habitats in the world.

Natural Levees.  These are high grounds that formed at the edges of rivers. The soils are very sandy, and the elevation above normal water level allows hardwoods like Live Oaks to grow.  If you see Live Oaks in coastal Louisiana, you are seeing relatively high ground.  If this land subsides, the oaks will die and be replaced by more water tolerant species.

Bottom-land Hardwoods.  These are areas that occasionally flood, but are usually dry.  Typical plants include a variety of hardwoods (hackberry, elm, maple, ash, honey locust, elderberry), and animal life includes virtually all species of land animals common to south Louisiana. 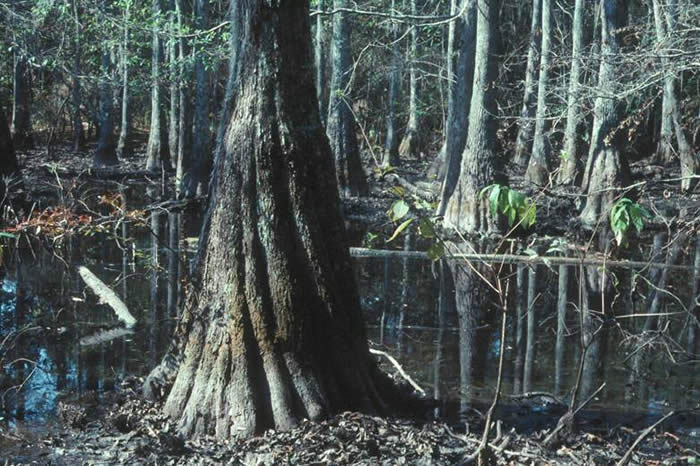 Swamp.  The definition of a swamp is any place holding water and having woody vegetation.  In Louisiana, the key species are Cypress and Tupelo-gum.  Any other plant that grows in swamps will have to grow on the raised hammocks of tree roots or on the trees themselves.  Spanish Moss is very common in swamps.

Freshwater Marsh.  The definition of a marsh is any place holding water that has non-woody vegetation growing.  Once we leave the swamps on our trip to the Gulf, we will be seeing a variety of marshes.  Freshwater marshes, by definition, have very fresh water.  They contain a very high diversity of plant species, many of which are commonly seen in ditches and ponds around Greater New Orleans (e.g., cattail, water lilies, irises, duckweed, cutgrass, wild rice, bullwhip, bulltongue).  The wildlife is very diverse as well, and includes alligators, snakes, turtles, mink, raccoons, otters, nutria, egrets, herons, ducks, bass, bluegills, grass shrimp, and many insects.

Intermediate Marsh.  Louisiana has such broad and diverse coastal wetlands that we have a unique type of wetland - intermediate marsh.  It is so named because it is characterized by a medley of plant species common to freshwater marsh and the saltier versions toward the sea.  The mild salt content of intermediate marsh causes there to be fewer species of plants.  A plant not found in freshwater marsh, Wire Grass (Spartina patens), is present with its typical wind-swept looking clusters of three foot long grass-like leaves.  Wire grass usually has a straw-colored appearance that is very characteristic and easy to recognize.  Intermediate marsh can be easily diagnosed (even from high in an airplane) by its tell-tale combination of freshwater plant species (especially cattails, cut grass, and water lilies) with Wire Grass.  Animal life is less diverse than in a freshwater marsh, but population levels of each species may be high.  This is a great habitat to view a variety of ducks and other water birds, snakes, alligators, a few turtles, muskrats, raccoons, nutria, and other fur-bearing mammals.

Brackish Marsh.  These marshes definitely have a salty quality to them and are made up mostly of Wire Grass.  If you enter a marsh that is virtually all Wire Grass, with little variation in plant species, then you are in brackish marsh.  Animal life is much less diverse, but waterfowl love it, and many of the salt-loving critters begin to appear.  This is one of the best habitats for blue crabs, redfish, speckled trout, fiddler crabs, and the like. 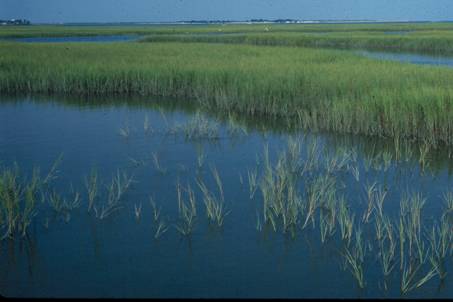 Salt Marsh.  This is marsh that is inundated daily with salt water tides.  There are few species that characterize this habitat because they are in regular contact with salt water.   In fact, the principal plant is Oyster Grass (Spartina alterniflora).  One can drive for miles through salt marsh and feel that one is seeing only one species of grass for as far as the eye can see.  There are a few other species that can withstand the salt water.  One of these in coastal Louisiana is Black Mangrove.  Animals are least diverse in salt marsh, but those that are there are really neat.  Periwinkles (snails) crawl up and down the Oyster Grass feeding on algae.  Ribbed mussels close up during low tide and open and feed during high tide.  Fiddler crabs abound, and clumps of oysters are common.  Elusive Clapper Rails dart in and out of the dense vegetation, and the occasional Seaside Sparrow may flutter up in a ritualistic dance.

The only other wetland habitats encountered in coastal Louisiana are the open estuaries (bodies of water where fresh water from rivers mixes with salt water from the sea), beaches and barrier islands, and the open Gulf of Mexico.  Each of these is quite diverse and very important to the economy, health, and culture of our region.